The Kingdom of Westgrove 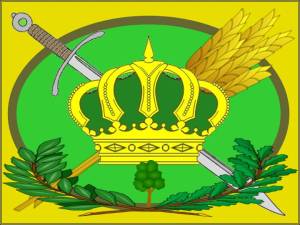 Westgrove is a feudal collection of twelve Groves. Collectively, the region is sometimes referred to as “the Westgroves” to distinguish it from the unified kingdom. This is especially true of people who live outside Gondox Grove, which contains the capital city of Greatbridge. Each of the twelve Groves is governed differently but all owe allegiance to the king. The individual Groves maintain authority over their own social and civic policies, such as entertainment and education, but the king has absolute control over a combined military and over all trade policies. The king is also responsible for establishing and maintaining a road system, protecting trade routes, standardizing currency, and for all negotiations and agreements with foreign powers.

Westgrove is a hereditary monarchy with succession normally passed to the oldest son of the reigning king. Although the king can designate another direct blood relation if he wishes, this has never been done.

The king maintains a staff of Royal Advisers who also serve as the heads of their respective governmental organizations. Advisers are appointed by the king and serve at his pleasure, although many Westgrovian kings have chosen to make them subordinate to the Chief Adviser and delegate their selection and supervision to him.

There are currently ten advisory positions:

The state religion of Westgrove is the Faith, a complex polytheistic system that includes a number of different sects. The Crown does not require adherence to the Faith nor does it officially favor one sect over any other. There is a certain social stigma toward disbelief however, so most Westgrovians are at least nominal followers.

The core mythology of the Faith includes a pantheon of gods representing various aspects of nature and society. The gods use fairies as agents to ensure the proper functioning of nature and human affairs.

The major gods of the Faith are:

Westgrove is the second largest country in area on the continent of Agprogia, with a total land area of approximately 600,000 square miles. Much of its abundant fertile land is devoted to farming, although many acres of wild forest and grassland remain.

The nation is divided into twelve regions known as “groves,” whose borders fluctuated until they were fixed at the Council of Berwick (see History).

The twelve Groves of Westgrove in order of area are:

Map of Westgrove showing the location of each Grove.

Westgrove is a major grower of grain, fruit, and vegetables, which it trades primarily with the small mountain kingdom of Gotrox in exchange for minerals and manufactured goods. It also exports processed foods such as wine, jam, and smoked meats to other nations. Fishing and a growing commercial trading fleet in several coastal cities promise to be important economic assets for the future. The nation’s ironworking industry has been in decline over the past decade due to depletion of domestic resources; however a new steel making process being developed by the Barter Foundry and Ironworks Company, headquartered in Greatbridge, may reverse this trend.

Westgrove maintains a standard decimal coinage system, which was originally created after the Council of Berwick (see History). Westgrovian gold-trees (valued at ten silver-fruit), silver-fruit (valued at ten copper-seeds) and, copper-seed coins have since become a widely accepted currency for international trade due to their consistent weights and purity.

The Westgroves have a checkered history of inter-Grove strife. Prior to the founding of the unified Kingdom of Westgrove, all twelve Groves were ruled as separate kingdoms. Several wars and border disputes resulted in countless deaths, depletion of resources, and the disruption of economic and technological development.

Two-hundred and six years ago (as of this writing), a unique combination of wise rulers, now collectively revered as the “founding fathers,” agreed to meet in order to forge a way to end further conflict. This gathering, known as the Council of Berwick, agreed, after two months of intensive negotiation, to recognize a single king over all of the Groves. Each Grove would owe fealty to the king but would maintain autonomy over strictly internal matters. This agreement effectively unified the Groves under King Cordwin of Gondox Grove, which was the largest and most powerful of the twelve Groves. History also records that Cordwin was a charismatic and intelligent ruler who truly cared about the welfare of his subjects.

The agreement, while exceptional, left a lot of detail work to be done, much of which was completed by special councils of experts assembled for that purpose. Major accomplishments of these groups include the establishment of the standard coinage still in use today, and creation of a new calendar for numbering years, marking the Council of Berwick as year one of the Westgrovian Empire (W.E.).

Bandit groups, ideological terrorists, and Grove leaders less enlightened than their forebears were, have tested the agreement from time to time, but it prevailed and has maintained a relative peace, at least among the Groves since. Unfortunately, it did not end war for Westgrove.

Since the unification of Westgrove, two wars have been fought the neighboring Kingdom of Gotrox. The War of Flat Fish Bay in 57 W.E. was ostensibly over fishing rights and territorial boundaries. Some historians claim it ended after only three months of intensive fighting because both countries ran out of warships to sink. The resulting treaty favored neither side. The Gotrox River War lasted far longer. It began in 121 W.E. as a trade dispute. Bandits, according to the official account, were ambushing Gotroxian merchant caravans traveling in Westgrove. Gotrox started providing military escorts to protect them. Westgrove objected to having foreign troops on its territory and sent their own to challenge them. The predictable result was another war. The treaty, drawn up six bloody years later, obligated both nations to protect peaceful commerce to the best of their abilities, and it prohibited foreign, armed troops from crossing the border without the express permission of both governments. Ironically, this was the same agreement that existed before the war started.

The two nations almost went to war again in 230 W.E. due to unsubstantiated rumors that Gotrox had found a way to use the mysterious Warden of Mystic Defiance as a weapon and intended to use it to spearhead an invasion of Westgrove. Both nations amassed large forces at the border, with additional troops provided by the Republic of Eastfield in support of Gotrox. Fortunately, armed conflict was averted, due in large part to the efforts of Prince Donald, the third son of King Leonard of Westgrove.