The Brane of the Space Pirates 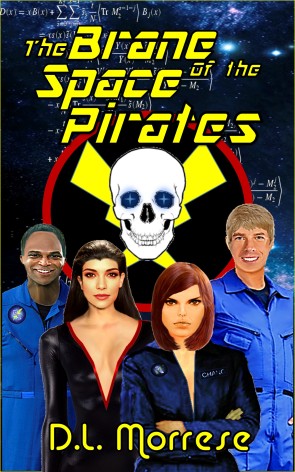 When the spaceship Brane Child emerges from skip-space near an unfamiliar space station, Lisa Chang thinks she and her crew may have finally found their way home. That is until the station’s weapons turn toward them, and a man dressed like a pirate appears on their view screen and demands their surrender.
Lost, unarmed, and with nowhere to run, it’s not as if she has much choice. Not yet, anyway.

And now for a short video promotion…

How does this book relate to your previous books?
The Brane of the Space Pirates is the third and final book in Brane Child trilogy. Like the others, Brane Child and The Scarecrow’s Brane, this one is positive science fiction—upbeat, hopeful, and sometimes even a bit funny. There is also a smidgen of cultural/philosophical satire. In this final episode, Lisa and her crew find themselves in a universe much like their own in some ways, but much different in others.

How long is it?
It’s a few pages longer than the previous Brane Child books. The paperback proof for this one is 415 pages. The others were about 300.

When will it be available?
The worldwide release of both eBook and paperback editions is planned for 16 May, 2016.

So, What comes next?
I have several projects going, but I haven’t decided which of these I will focus on over the next year.