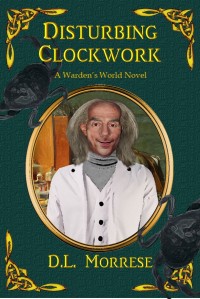 The Corporation abandoned the project and, along with it, the primitive workers whose ancestors came from prehistoric Earth. Other project assets were also left on the planet, some intentionally, others by accident.

Two thousand years later, a descendant of those workers, an eccentric natural philosopher by the name of Benkin, washes up on a lush desert island. His ship sank. The specimens he collected are gone. All he has are his wits and a case of rum. Things could be worse.

Spotting a rare lizard that he feels he must add to his collection, he wanders into the jungle and finds, in addition to more lizards, strange artifacts that resemble large clockwork bugs. Fascinating! He must study them.

Unfortunately, peaceful disassembly and investigation of his strange find is not the future in store for him. Snayk, a fugitive from the king’s justice, is intrigued by what he overhears Benkin telling his friends at a pub. It is not mere scientific curiosity. Snayk suspects that these mechanical marvels may provide a means to gain power and privilege.

He is not the only one with designs on the quirky scientist. Sketches of his inventions have reached the new science center in the capital city, and the administrator sends a personal messenger to encourage Benkin to join their august group. When she arrives, she finds Benkin has mysteriously disappeared.

Through deceit and abduction, Snayk gains control of the clockwork bugs and, with them, threatens lives, the kingdom, and the future of humanity on the planet. Benkin and the beautiful messenger (to say nothing of an ancient android dog) will find they are hard pressed to stop him.

Disturbing Clockwork, with its endearing characters, adventure, and wit, is a science fiction novel accessible to readers of all genres yearning for something fresh and different.

There is a whimsy in the way Morrese writes that could be called light fantasy. His work is infused with humor and intelligence and general good fun for the reader. Disturbing Clockwork has what readers want. Action, adventure, humor, a hint of romance and great promise of continued adventures. A reader can spend a wonderful day touring Westgrove with Trixie and her friends. I am a big fan of Douglas Adams and Jasper Fforde…. Morrese writes with the same spirit as these authors. ~ Review by Rabid Readers

How does this book relate to your previous books?

Who are the other characters?

New characters include Benkin, a natural philosopher in Westgrove’s emerging scientific enlightenment, and some of his interesting friends.