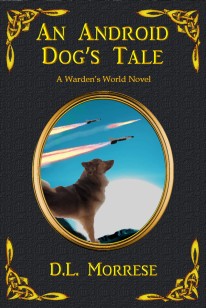 MO-126 is a dog, or a reasonable facsimile thereof. He is a construct and an employee of the Galactic Organic Development Corporation, which searches the galaxy for primitive sentient species to save from extinction and then creates colonies of them on Corporation agricultural planets where they can live happily and safely. The transplanted species survives, and its members produce some of the most expensive and sought-after food in the galaxy, which the Corporation profitably sells to developed worlds with this guarantee:

Of course, keeping the primitives primitive enough to ensure the Corporation’s promise of natural purity can be a challenge, especially when they’re like those it found twenty thousand years ago huddling in caves and scraping a meager and precarious existence on a pale blue planet in the Milky Way’s Orion–Cygnus spiral arm. The humans keep trying to change things.

An Android Dog’s Tale is the 15,000-year episodic story of one canine mobile observer android who must make choices about what he wants to accomplish in his artificial life. Does he accept the wisdom of his makers or does he dare to question?

How does this book differ from your previous books?
An Android Dog’s Tale is a prequel to my other Warden books. I began life as a collection of notes and scenes to help me flesh out the setting. It was a story that needed telling, though, so I did. I revised An Android Dog’s Tale in 2018 to clean up some of the prose and give it a new cover.

Why a prequel?
Well, part of the reason was that my father, after reading the Warden books, asked me, “So this all happens on another planet, right?” (He’s a mystery reader, mainly. Science fiction is not his genre.)
“Yes,” I said.
“So, how did people get there?”
I knew, of course, and I thought the backstory provided in The Warden Threat was sufficient to explain how, why, and when people ended up on a planet 24 lightyears from Earth. Apparently, it was not. The setting was just a bit too much outside his normal experience. An Android Dog’s Tale provides some of this backstory in more detail. It is told from the perspective of MO-126, a mobile observer android of the Galactic Organic Development Corporation.

Is MO-126 a new character?
No. MO-126 appears in most of the other books. He returns in The Warden Threat, appears briefly in Amy’s Pendant, and has a major role in Disturbing Clockwork. In these books, he is known simply as ‘Moe.’

The book description says the story spans 15,000 years. How is this possible?
Corporation technology is made to last. At 15,000 years old, MO-126 is only middle age.

No, I mean, technically. How can one novel account for this much time?
The story is told in a series of episodes, more or less like short stories. The time between them varies, from almost 4,000 years to less than 60. Each episode has a plot of its own but also progresses the plot of the overall story about MO-126 and the choices he makes.

So with this new book being a prequel, what is the recommended reading order?
The chronological order for the stories told in these books is:
1. An Android Dog’s Tale
2. The Warden Threat
3. The Warden War
4. Amy’s Pendant
5. Disturbing Clockwork

Will there be more books?
I certainly hope so. Much depends on the reception these five receive. If you like them, please tell others. If you don’t, let me know. Maybe I’ll switch to a different hobby, or at least not spend as much time and money on this one.