Book Review – Voyage to the Red Planet by Terry Bisson 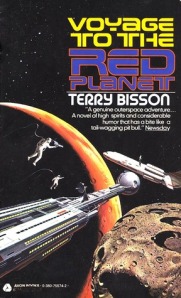 What struck me when I was reading this near future space adventure is how dated it is. Much has happened since this was originally published in 1991 (not all that long ago), such as further (robotic) exploration of Mars and the collapse of the Soviet Union, both of which never occurred in this story. A couple of the things that did happen in this fictional tale were a rapid decline of the American space program and the privatization of most aspects of government, including NASA and the U.S. Navy. The book does not present a very hopeful future as a result, but it does provide a bit of subtle cultural satire.

It is told from and omniscient point of view with multiple characters, although the central one is Bass, an aging astronaut from NASA’s glory days. He is approached by an entertainment conglomerate to help ‘salvage’ a spacecraft built (but never used) by NASA and the Soviets, and to bring a crew of movie stars to Mars to make a movie and, as a result, a lot of money.

The writing is good, the characters are plausible and their individual motivations make sense, but the premise itself, in addition to being dated, just doesn’t. At least not much. I accept the exaggerations about corporate takeovers of government functions for the sake of cultural satire, but how could a huge spaceship be built in orbit without it being common knowledge? Why would it be fully provisioned and then abandoned until it is salvaged by a movie company twenty years later? And sunlight digitized and stored on CDs to provide a power source? Sorry. That’s not ridiculous enough to be funny or realistic enough to be believable.

All in all, this is a fairly enjoyable hard science fiction tale. It has some satire, a bit of humor, decent characters, and a plot that hangs together well. I can recommend it for Science Fiction fans looking for a good, old-fashioned story of near space.

Felix and the Frontier – by Chester Burton Brown

I found this book refreshingly different and very enjoyable. It is a short tale that follows the explorations of Felix, a galactic traveler who is not a robot. He is extremely curious, intensely appreciative of the wonders of the universe, kindly but detached. He is an explorer, a scout for the Solar Neighborhood, a Zorannic man, and while he may be non-biological, he is most certainly not a robot. I saw his personality as that of the quintessential scientist. He is a very charming fellow.

There is a surprising amount crammed into this little novel. It’s like a space faring Gulliver’s Travels. Felix roams the galaxy, hopping from one planet to another using his ‘gatehouse,’ which seems more like a TARDIS than a spaceship. His mission is to scout, to discover new life and new civilizations, and to assess the potential of the places he explores for colonies for the Solar Neighborhood. But just when it seems that this is all the story is, a plot happens. The Solar Neighborhood is not the only civilization looking to colonize the galaxy. And the others may not be going about it as nicely as they are.

So how is this book different? Well, it’s written in third person present tense, which is common for a synopsis but not for a novel. The prose and vocabulary are precise, the punctuation is stylistically correct, and the voice is unique. Let me give an example.

‘This is when he is eaten. It is sudden, vicious, and bewildering. Felix has the vaguest impression of being rent asunder and then is cast into the rudest kind of soundless, sightless, darkness…’

See? Well, maybe not, so I’ll just say I liked how it was done.

What else did I especially like? I mentioned the main character already. He is quite enjoyable. The style and prose, yeah, got that. I haven’t mentioned the tech yet. It’s interesting. The gatehouse isn’t a spaceship, although Felix can build one if needed for short planetary hops. The gatehouse swaps bits of space-time to get him where he needs to go. How it does this, we don’t know, but it makes sense. The robotic ants are quite cool. These are little constructor robots, not a new idea but a very logical one. They, too, make sense.

So, what didn’t I like? Nothing, really. The story seems not to have a real plot at first, other than following Felix explore the universe. I was okay with that, although some might see this as a slow start. When more of a plot did develop, it started and then ended rather abruptly, and the story concludes with something of a cliffhanger. I admit this is mildly annoying when the sequel is not immediately available.

Overall, though, I found this an exceptional book, different from most. I highly recommend it.

The 100 Year Starship Symposium (100YSS) – Resurgence of a Dream

For the last three days, I have been attending the 100 Year Starship Symposium sponsored by DARPA, the Defense Advanced Research Projects Agency. (Twitter search: 100YSS) The following statement from their website describes the intent of the symposium.

The 100 Year Starship™ Study is an effort seeded by DARPA to develop a viable and sustainable model for persistent, long-term, private-sector investment into the myriad of disciplines needed to make long-distance space travel practicable and feasible.

The genesis of this study is to foster a rebirth of a sense of wonder among students, academia, industry, researchers and the general population to consider “why not” and to encourage them to tackle whole new classes of research and development related to all the issues surrounding long duration, long distance spaceflight.

I went to this event with my son, a recently graduated aerospace engineer whose Master’s thesis was on nuclear propulsion for spacecraft. He wanted to go because this is directly related to his field of expertise. I went because I am a speculative fiction writer with a long time interest in the dream of space exploration and because ten renowned science fiction authors were there as panel members to talk about science fiction and its influence on science fact: Stephen Baxter, Geoffrey A. Landis, Allen Steele, Gregory Benford, Robert J. Sawyer, Elizabeth Bear, Joe Haldeman, G. David Nordley, Charles Stross, and Vernor Vinge. I was privileged to speak with Robert J. Sawyer, during one of the breaks. He is an amazing fellow.

The sense of wonder the DARPA statement mentions above struck a chord with me. I feel that sense of wonder. My children seem to as well. I almost cannot conceive why everyone does not share this feeling.

When I was a child all too many years ago, I was inspired by books for young adults with space faring heroes, most notably, or at least memorable, was the Tom Corbett Space Cadet series. I had them all. The science was badly flawed, the characters were shallow, but the books conveyed a dream of space exploration and discovery and I became infected. I read more science fiction, Heinlein, Clarke, Asimov, Bradbury, Sagan and others. I was fascinated with movies about human exploration of space, especially 2001 A Space Odyssey, Silent Running, and, years later, Contact. Star Trek created such a hopeful vision for the future that I eagerly embraced it and its cancellation as a television series felt like the end of the world to me, or at least the end of a dream. Later, I felt a resurgence of the dream with the airing of Carl Sagan’s Cosmos. Of all the science documentaries ever produced, Cosmos, in my mind, is the one that best conveys that sense of wonder the DARPA statement talks about. But again the dream seemed to be shared by only a few.

Humanity must explore and expand to the stars. I believe this as almost a matter of faith. When I was younger, I felt that our exploration of space was inevitable. Now I think it is imperative but that it may not happen — at least, not soon. I feel that somehow we have lost our communal sense of wonder. We have lost the dream. I support the mission of the 100 Year Starship to reinvigorate that dream. I sincerely hope it can. But what can I do, what can we do to help?

Each according to his or her abilities, I suppose. I am a fledgling soft science fiction writer. I saw the genre of speculative fiction, especially books targeted at young adults, trending toward heroes who resolve problems with magic. I have nothing against magic as a plot device and I enjoy fantasy fiction but I felt there was a need for more fictional heroes who expressed skepticism about magical explanations and who searched beyond them to discover how things really were. My first three books carry that as a theme. They begin with items purported to be magical and the characters need to look beyond that simple explanation in order to resolve their problems. Although the setting for these books is a human colony on a distant planet, they are not specifically about space exploration. After my experience at the 100 Year Starship symposium, I am toying with ideas for my fourth novel that will more prominently feature space exploration. This may be the best I can do to encourage this sense of wonder. What can you do?