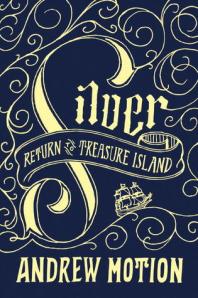 A sequel to Robert Louis Stevenson’s Treasure Island? Really? When I saw this on the shelf at my local library, I thought it takes a pretty competent and gutsy writer to try that. Well, why not? I picked it up, took it home, and read it over the course of the last few evenings. This is what I thought about it.

I won’t try to compare this novel to Treasure Island. It’s been years since I’ve read Stevenson’s classic adventure tale of pirates and buried treasure. This is perhaps just as well since this novel stands on its own, albeit with settings and minor characters from Treasure Island. It takes place about forty years after that book ends. Jim Hawkins, the son of the original Jim Hawkins, is the first person narrator. Natty, the daughter of Long John Silver, is his companion and the instigator of their adventure together. Their goal is to return to Treasure Island and recover the remaining treasure — a large number of silver bars.

I loved the prose from the beginning. It definitely has a quality and style you see too seldom in recent writing. It did not try to ‘grab’ be at the beginning. It did not try to shock me or entice me with ‘action.’ (I normally hate openings like that.) It invited me in, the narrator almost seeming like a bashful host for the story he was to tell. In my opinion, the prose style alone makes this book worth reading.

In other ways, though, I found the novel less satisfying. The plot tends to drag in places, with no mysteries or answers being discovered, just bits of well-executed prose marking the passage of time and reflecting. I also did not find the characters overly interesting. Jim, as the average young man grown bored by his father’s retellings of his adventures, just did not ring true to me. He seems too subservient and has too little longing for his own adventures to be interesting until Natty shows up. After that, he mainly follows her lead. Although it would be historically unlikely, I think this story may have been better told from Natty’s point of view rather than from Jim’s. She is the far stronger and more interesting of the two main characters. I would not object to this lack of fidelity to historic sensibilities because this is not a story told by a Victorian writer for a Victorian reader. It is a modern story for a modern audience.

Overall, I enjoyed this book. I recommend it to fans of the original Treasure Island and to anyone looking for a well-written new novel that is out of the ordinary.