May 25th is Towel Day, the annual commemoration of the life and work of the late great Douglas Adams and especially his enduring highlight of comic science fiction, The Hitchhiker’s Guide to the Galaxy. It is a unique book, both absurd and insightful, that has endured as something of a cult classic since its original publication in 1979.

Few authors can compare their works for originality and intelligent humor to the Hitchhiker’s Guide series, and I am certainly not one of them, but for reasons I cannot explain, some ardent fans of these books also seem to enjoy mine. So, in celebration of Towel Day, I’m making digital editions of all five of my currently published novels free on Smashwords.

Two of these books are currently free on Smashwords by naming your own price, which can be $0.00. The other three each have their own unique coupon code, which you can enter when checking out to take advantage of the free promotion.

NO COUPON CODE REQUIRED – SET YOUR OWN PRICE AT $0.00 WHEN CHECKING OUT.
MO-126 is a dog, or a reasonable facsimile thereof. He is a construct and an employee of the Galactic Organic Development Corporation, which searches the galaxy for primitive sentient species to save from extinction and then creates colonies of them on Corporation agricultural planets where they can live happily and safely. The transplanted species survives, and its members produce some of the most expensive and sought-after food in the galaxy, which the Corporation profitably sells to developed worlds with this guarantee:
Caringly grown, cultivated and harvested by simple sentient life forms.
No artificial ingredients, pesticides, herbicides, or mechanized equipment used in processing.
Guaranteed 100% organic.

Of course, keeping the primitives primitive enough to ensure the Corporation’s promise of natural purity can be a challenge, especially when they’re like those it found twenty thousand years ago huddling in caves and scraping a meager and precarious existence on a pale blue planet in the Milky Way’s Orion–Cygnus spiral arm. The humans keep trying to change things.

An Android Dog’s Tale is the 15,000-year episodic story of one canine mobile observer android who must make choices about what he wants to accomplish in his artificial life. Does he accept the wisdom of his makers or does he dare to question?

NO COUPON CODE REQUIRED – SET YOUR OWN PRICE AT $0.00 WHEN CHECKING OUT.
Prince Donald, the idealistic third son of the king of Westgrove, believes he may be the only one able to protect his country from an invasion spearheaded by an ancient and massive magical stone warrior known as the Warden of Mystic Defiance. Donald, unfortunately, is woefully unprepared. His only real understanding of such things comes from his reading of adventure stories. When he finds an ancient scroll he believes may allow him to take control of the mysterious Warden, he eagerly takes on the task. He dreams of saving the kingdom and becoming a hero like those in his epic adventure stories. To his dismay, his quest turns out to be nothing like he imagined. He finds the stories in his library seriously understate the complexities and hardships involved. He also soon realizes that the real world can be much more confusing than fictional ones, and the hero is not necessarily predestined to save the day.

COUPON CODE SM22N
The Warden War continues the quest begun by Prince Donald in The Warden Threat. His father, King Leonard of Westgrove, has been told that the neighboring kingdom of Gotrox has discovered a magical means to animate a mysterious and gigantic ancient stone warrior, the Warden of Mystic Defiance, which it plans to use it to spearhead an invasion of his country. Donald is convinced this is a hoax carefully crafted by his father’s chief adviser to bring about a war to gain control of Gotroxian resources. Donald is determined to thwart him. It will not be easy. Chief Adviser Horace Barter has resources, connections, influence, and the almost unquestioned trust of the king. Donald, sadly, has none of these. What the young prince does have is a nominal position with the diplomatic team being sent to Gotrox and the companionship of a few rather unique friends including a pair of 15,000-year-old androids, one of which is a dog — or a reasonable facsimile thereof.

COUPON CODE NW39Y
Amy, the only child of a poor family living in the bustling city of Dolphin Point, is given an amazing and potentially dangerous pendant as a present for her fourteenth birthday. She does not know how amazing or how potentially dangerous it is. If she did, she would cherish it even more. She is that kind of girl.
Through her investigations of the mysterious pendant, she uncovers an ancient mystery—the remnants of a vast alien commercial enterprise buried beneath surface of the planet. Unfortunately, the central computer for the complex is aware of her intrusion and it cannot let her escape with knowledge of its existence.

COUPON CODE AQ22V
On a small island called Bob off the southern shore of the great Kingdom of Westgrove, Benkin, a brilliant if somewhat quirky scientist, discovers something extraordinary — clockwork automatons that can obey commands. For Benkin, this is an amazing scientific discovery, one he wants to explore; one he believes may revolutionize mankind’s understanding of the world. For Snyde, a fugitive from the king’s justice, it is something he can use…

This humorous, exciting, and charming story sees the return of several characters from the three previous novels set in this world, plus a few endearing additions. If you were wondering what happened to the thoroughly evil Snyde, or if Trixie and Prince Donald ever got together, this book provides the answers. 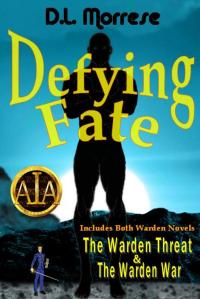 As an added bonus, Defying Fate, the exclusive Kindle edition that combines The Warden Threat and The Warden War in one easy download will also be available free from Amazon between Towel Day and the following Thursday, May 29th 2014.

A reader and writer of speculative fiction. See my website for more information on me and my writing. https://dlmorrese.wordpress.com/
View all posts by Dave »

Posted on May 24, 2014, in Speculative Fiction and tagged Free Books, Towel Day. Bookmark the permalink. 3 Comments.